Diwali, one of the most important festivals of Hindus is not just a festival, but a series of festivals. There are five days in rows that are celebrated, commencing from Dhanteras that marks and end with Bhai dooj. Govardhan Puja is the fourth day of the celebration. 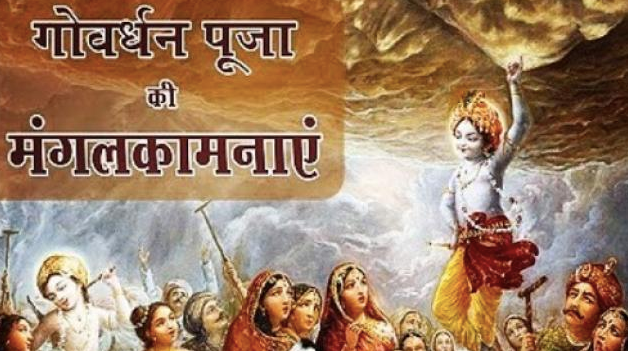 In this year 2021, Govardhan Puja will fall on 05th November. The day will be a Friday.

The History Behind Govardhan Puja

The story of Govardhan Puja is found in the Hindu epic “Vishnu Puran.” Earlier, the people of Gokul used to worship Lord Indra because he was the one who used to provide with rains. They believed that worshipping Indra will help him to get abundant of rains.

It was Lord Krishna who explained to them that people got rains because of the Mount Govardhan. Lord Indra had nothing to do with the mountain. Govardhan was the small mountain located in the town. He explained that people should worship mountain instead of Lord Indra. Agreeing upon this, people started worshipping mountain.

The anger of not being worshipped made Lord Indra furious. He attacked the people f Gokul with heavy rains. When people prayed Lord Krishna to save them, he came to their rescue and worshipped the mountain first. After that, he lifted the mountain on his little finger just like an umbrella and provided shelter to the city this way. After this event, people started calling Lord Krishna Girdhari or Govardhandhari.

While doing Govardhan Puja, make sure to do the Puja at Govardhan Puja time in 2021. Performing Puja in the definite muhurta manifolds the result of your efforts. In different regions of the country, Govardhan Puja is celebrated in different patterns. In most of the Indian states, people celebrate this festival with too much enthusiasm and zeal. Let us have a look:

This way of celebrating the festival is quite popular in Mathura and Nathdwara. The idols of the deities in the temple are given a bath with milk. The idols are decorated with shiny, silky clothes and dazzling gems like diamonds, rubies, and pearls. The deities are worshipped after this and Bhog is offered to them. As per the tradition, the Bhog is served in the form of a mountain.

The same ritual is observed in other states like Punjab, Uttar Pradesh, and Bihar.

Preparing the cow dung hillocks is the most important ritual of Govardhan Puja. People adorn these hillocks beautifully with flowers and decorate with kumkum and akshat. The ritual also includes performing ‘parikrama’ of these hillocks.

The idea of preparing and worshipping hillocks refers to praying Lord Krishna and asking Him to remove hardships from life. People also decorate their cows and bulls on this day and decorate them with flowers and kumkum. They garland them and worship them because they are believed to be dear to Lord Krishna.

The preparation of Annakoot is another integral part of the rituals performed on this day. The Annakoot Prasad is prepared in many temples as well and distributed among family and friends.

Like every other festival, Govardhan Puja also makes the culture and tradition of the country rich. It is just one other method to relive our glorious past and pass the memories to the coming generations.