Since long, people rely on the power of gemstones. It is believed that gemstones attract good luck and prosperity into one’s lives. The stones strengthen the ruling and weaker planets and assure that the wearer leads happy and prosperous lives. The lucky stones suggestions are based on the date of birth of the native. 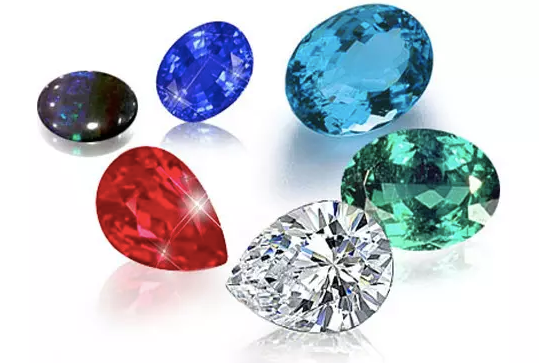 Astral stones is another name for zodiac gemstones. The word is derived from astrology and holds an important part in history for its holistic belief. At that time, astrology developed as a science to tell the present time and what time has passed.

Choose Your Lucky Gemstone As Per Your Zodiac Sign

Wearing the gemstones based on your zodiac sign can get you peace, prosperity, happiness, and wealth. It also helps you achieve marital bliss in your life. Wearing your lucky stone in the index finger can help you in getting married quickly.

Let us read about the lucky gemstones for every gemstone.

Aries (21st March – 20th April) – Because Mars is the ruling planet of Aries; It is suitable for Aries to wear red coral. The stone helps them to combat problems if their life and promotes courage. It strengthens them and pushes them to fight their every problem efficiently. Wearing this stone will significantly help in recovering lost land and getting a cure for their blood diseases. Wear white in coral in ring finger on Tuesday. The planet Mars is not compatible with Mercury and Saturn. Hence, never combine red coral with Blue sapphire or Emerald.

Taurus (21st April – 21st May): Taurus natives are ruled by the planet Venus, and hence diamond is their lucky gemstone. Wearing diamond in their fingers can assure benefits like peace, comfort, luxuries, and pleasures. Moreover, it symbolizes a happy married life as well. The stone should be worn in the middle finger. The planet Venus is not compatible with Sun and Moon. So, the diamond should not be worn with Ruby and pearl.

Gemini (22nd May – 21st June): The ruling planet of the Gemini natives is Mercury, and that is why they can take benefit from wearing Emerald. Emerald promotes their communication power, intelligence, and peace. The stone can be a great benefit to those who suffer from speaking problems or brain or memory problem. The stone should be worn in little finger on Wednesday. The planet Mercury is not compatible with the Moon, and hence, it should not be worn with a pearl or moonstone.

Cancer (22nd June – 22nd July): These natives are born under the rule of the Moon. You are wearing a pearl or moonstone suit these natives. It helps in enhancing fortune. Goddess Lakshmi imparts special blessings in these natives and rotates your luck in your favor. It helps you to gain mental balance, intelligence, and marital bliss. Pearl should be worn in the little finger on Monday.

Moon is not compatible with the planets Rahu and Ketu, and that’s why one should beware of wearing moonstone or pearl with hessonite or cat’s eye.

Leo (23rd July to 21st August): The Leo‘s are ruled by the Sun, and their favorable gemstone is Ruby. Ruby is known to dispel sorrows, promotes nobility, manhood, and power. It is advised to wear this gemstone in the little finger on Sunday. As we know, Sun is not compatible with planets like Saturn, Venus, and Ketu, Ruby should not be worn with Emerald, Blue Sapphire, diamond, hessonite, and cat’s eye.

Virgo (22nd August to 23rd September): The ruling planet of Virgos is Mercury, and their ruling gemstone is Emerald. Emerald promotes the power of speech, peace, and intelligence. The stone is considered too lucky for students as it immensely helps them in their studies. It saves the wearer from cheating as well. The stone should be worn in the little finger on Wednesday.

As per the astrological studies, Mercury is not compatible with Moon. Hence, Emerald should never be combined with moonstone or pearl.

Libra (24th September – 23rd October): Venus is the ruling planet of the natives that belong to Libra, and their lucky stone is diamond. Diamond ensures prosperity, peace, and good luck when someone wears it. It bestows the wearer with happy married life as well. It is advised to wear this stone in your little finger on Friday.

As per astrology, Venus is not compatible with planets like Sun and Moon. Hence diamond should never be paired with Ruby or pearl.

Scorpio (24th October – 22nd November): Scorpions are ruled by the planet Mars. Their luck gemstone is red coral. Wearing this stone promotes strength, confidence, and capability of handling the challenges of life. A red coral should be worn in ring finger on Tuesday.

Mars is not compatible with fellow planets like Mercury and Sun. Hence, make sure never to combine the stone with Emerald or Blue sapphire.

Sagittarius (23rd November – 22nd December): The ruling planet of Sagittarians is Jupiter. The yellow sapphire is considered lucky for the natives who belong to this zodiac sign. It bestows the native with peace, marital bliss, and happiness. Wearing this stone also promotes quick marriage. One should wear this stone in index finger on Tuesdays.

The planet is not compatible with Mercury and Venus. Hence, yellow sapphire should not be worn with Emerald and diamond.

Capricorn (23rd December – 20th January): The natives of Capricorn zodiac sign are ruled by the planet Saturn. Wearing sapphire can be highly beneficial for these natives. It is considered as one of the fastest acting gems. It prevents all the evils and diseases from entering native’s life. One can easily depend on this stone for attaining name and fame. The stone should be worn in the middle finger on Saturday.

The planet Saturn is not compatible with Sun, Moon, and Mars and hence, the sapphire should not be worn with pearl, moonstone, Ruby or red coral.

Aquarius (21st January to 19th February): Being ruled by Saturn, Aquarians can take benefit from wearing Blue Sapphire. It takes out all the negativity from wearer’s mind and promotes happiness and peace. It is advised to wear Blue Sapphire in the middle finger on Saturday.

Never wear Blue sapphire with Ruby, pearl or red coral because the planet Saturn is not compatible with Sun, Moon, and Mars.

Pisces (20th February – 20th March): Pisces are ruled over by the planet Jupiter. Yellow sapphire is considered as their lucky stone. It promotes quick marriages and blesses the native with marital bliss. It is advised to wear this gemstone on Thursday in the index finger.

Yellow sapphire should not be worn between gems like Emerald and blue sapphire because Jupiter is not compatible with Mercury and Venus.

We hope this article will help to identify the lucky gemstone for any specific zodiac sign. Also, now you know which two gemstones should never be combined. If you have ever made any mistake in choosing the gemstone for you or if you are wearing it in the wrong finger, use this article to correct your error.