Love marriages are common in the current scenario, and there are many people still go for love marriage prediction to know whether the wedding life of the partners would go smooth without any hassles. Our Vedic astrology predicts the possibility of a love marriage exactly. 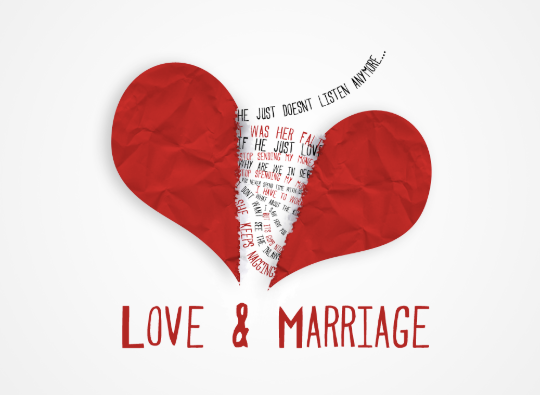 Most of the youngsters are unaware of the difference between infatuation and love. So, after attracted by the physical look, they tie the knot in haste and later suffer about their incompatibility. Hence, most of the love marriages end in divorce.

Click Here to Consult Expert Astrologers on Phone to Know About Love Marriage in Your Kundli.

How are the planetary positions involved in marriage?

The Kundli of a native predicts whether he is destined to marry or not. Based on the planetary positions, only the marriage happens, whether it is love or arranged. The 7th house and its lord Venus predict the nature and timing of marriage in men, whereas the 7th and 8th houses and their lords Mars predict the nature of marriage for women.

To check whether yours is a love marriage horoscope, there are many types of marriage calculators available online that focus on love marriage, delayed marriage, denied marriage, and promised marriage. It also focuses on the planetary positions that decide the marriage time; the factors pave the path to divorce and separation besides analyzing planetary positions for an unhappy married life. Generally, in such online tools, you will be asked to enter your date of birth, time of birth, and Kundli type. After feeding the details, online reports will be generated. However, seeking an Astrologer consultation is always best before stepping into marriage life.

Venus in a natal chart

Venus is the prime planet for love. Without a proper placement or strong influence of Venus in the natal chart, it is highly difficult to get a loving, lovable partner in life. If Venus is debilitated or combusted, the native’s life will be blank in romance and love though he is a love married person. His marriage will not be long-lasting. When the planets period signify 5th, 8th and 11th houses, love marriages happen. These houses represent falling in love or holding a romantic relationship.

Love marriage in Kundli can be assessed honestly and thoroughly only by an experienced astrologer. If you are in pure love, better meet an astrologer to see your planetary positions and remedies if any to design your life with an abundance of happiness.