Shradh is a Sanskrit word that refers to anything that is done with utmost sincerity and faith. The 15 days lunar period is considered highly important for Hindus. People pay homage to their ancestors during this time period of 15 days. Conceptually, this is a time period when we feel heartfelt gratitude for our deceased parents and forefathers and, pray for them so that they can stay is peace. Poojas are performed and food is offered to priestly Brahmans. 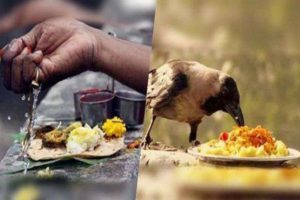 This 15 days period plays an important role in the process of pacifying the departed souls. There are Hindu scriptures like ‘Garuda Purana’, Agni Puran, and Vayu Puran define the significance of Shradh in great length.

Shradh Dates that you should follow through the days

The last day of the Pitru Paksha shradh is Sarva Pitru Amavasya. It is popularly known as Mahalya Amavasya as well. This Amavasya is the most significant day of the Shraddha. The Shradh of Amavasya tithi is done for people who died on Amavasya tithi, purnima tithi or Chaturdashi tithi.

Moreover, if someone fails to perform any of the other Shradhs, then you can perform Amavasya Shradh for all the deceased souls of the family. Even if you don’t know the dates of death of your forefathers or you have forgotten it, then these Shradhs can be performed on the day of Amavasya. That is why the day is also known as Sarvapitra Moksha Amavasya.

Dos and Don’ts of Shradh/pitru paksha

We have scripted a list of dos and don’ts that will help you fiulfill all the conditions of Shradh and will keep you prepared.

The time period is considered highly significant because according to Hindu beliefs, the pooja, prayers and prashad offered to deceased souls reach them almost instantly. It helps them to attain peace, and they bless their children.

Doing a shradh pooja is a long process and all the steps should be followed while performing it. Moreover, it is suggested to perform the pooja in the presence of a Brahman. Family members can only eat after the priest and ancestors (cow) are done.

Talk to Our Astrologers And Ask as many question as you want.