Raksha Bandhan, the festival that celebrates the love and bond between brother and sister is celebrated throughout the country. The festival is celebrated with full enthusiasm and excitement. Also, known as Brother’s and sister’s day, Raksha bandhan falls on a different date each year.

The festival falls on th e full moon of the Hindu month of the Shravana (Shravana Poornima). Raksha Bandhan 2022 date in Indian calendar falls around July and August.

Every brother and sister believes that the sacred thread of Rakhi reinforces their relation. It strengthens their bond and makes them new memories. The sisters pray for the long life of their brothers, and the brothers promise them to protect their lives and respect.

Rakhi or Raksha Bandhan is a bond of eternal and unceasing love. It is a mantra of everlasting protection.

When is Raksha Bandhan? 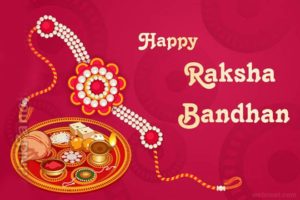 This year Raksha bandhan will fall on August 11, 2022, Thursday. Take a look at the panchang and shubh muhurats of the festival.

What are the Stories Related to Raksha Bandhan?

Like every other festival, a good number of folk tales are associated with Rakhi as well. These stories have emerged from the History or mythology of the country. You may or may not have heard them.

Perhaps the most popular Rakhi story is related to Krishna and Draupadi. Draupadi was the wife of five Pandavas, and the story has emerged from Mahabharata.

The story goes on like this. One beautiful day of Sankranti, Krishna cut his little finger while handling sugarcane. His wife Rukmini brought some instant help by bringing a cloth, another wife Satyabhama send some another cloth, but while Draupadi saw this, she tore off the pallu of her sari and bandaged his bleeding finger.

It was a great deed, and in return, Krishna promised Draupadi to help her in her time of need and distress. He uttered the word Akshayam, which means never-ending.

Another popular folk tale of Rakhi is related to Rani Karnawati and Emperor Humayun. This version of Rakhi story is worth mentioning. Rani Karnawati succeeded the throne of Mewar after the death of her husband, Raja Sanga. She was ruling on the name of her son Raja Vikramjeet.

There came a time when Bahadur Shah of Gujarat attacked Mewar for the second time – he had defeated the reign of Mewar earlier. At that time, the queen decided to reach to his nobles.

Humanyun was the great Mughal ruler of that time. Rani Karnawati wrote her about the attack and sent him a Rakhi. By sending this Rakhi, she seeks protection from the King. Interestingly,

Humayun’s father has once defeated the reign of Raja Sanga, but when Humanyun received the Rakhi, he decided to help.

He was in the middle of some other battle at that time but left it in between to help the queen of Mewar. Unfortunately, he failed to make it in time, and by the time he reached Mewar, Rani had already performed Jauhar.

When Humanyun reached the place, he restored the rule for her son Raja Vikramjeet.

These interesting stories not only restore our faith in humanity but make us realize the importance of our festivals and rituals. It is believed that every brother helps and protects his sister like Krishna or Humanyun did. This is a lifelong promise that every brother keeps.

Is Rakhi a public holiday?

Although the festival is quite popular in most of the states of the country, Rakhi is not a public holiday. It is an optional holiday. It is one of the very few holidays that are left on the employee’s part to choose. Most of the offices and businesses remain open on this day; however; a few employees may decide to take the day off.

We have tried to provide every inch of information regarding this popular Indian festival. The date is around, so this is the right time for everyone to indulge in the preparations.