Lizard is a common reptile. It might have been seen in every house. But, Lizard Astrology is otherwise called Gowli Shasthram a part of Hindu Astrology. Falling lizard on the parts of the body conveys some matter for both men and women. These effects are explained in “Muhurat Martand”. The shastra tells every movement of lizard binds with significance, and in 65 parts of the body, the lizard will fall that would forecast good things and bad evils.

The effects of lizard falls differ from men to women as per shastra. 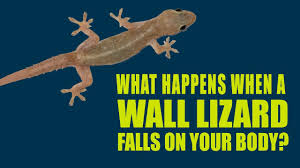 There are two colors of lizards say black and white can be seen at home. White lizard is considered as most favorable whereas black is coined as inauspicious and unfavorable. Its “Tik Tik” sound has different omens and indications in our daily life. A house should reflect the tone certainly for few times a day. Unless you hear it, you should thoroughly check the background of the house and the land where it is built.
Consult AstroLaabh’s Best Astrologers on phone and talk to astrologer (Starting From Rs.99 Only).

If the lizard is falling on the right hand of any person, then the person will get a new wearer, and the things will happen as a reverse case of the left hand.

Head: When the lizard falls on the head, it indicates the person will be bestowed with wealth, royalty with luxury life. If it falls on a rich person’s head, his wealth will start to destroy gradually.
If a rich person with a sick and bedridden health condition, and if the lizard falls on his head, then he will start to suffer a lot and it would be like death-like suffering. But, this case will be in reverse for a poor man.

Right ear: Falling of a lizard on the right ear will promote the longevity of the native.

In to the lip: An indication of destroying wealth.

Under the lip: The native will have a change of getting a wealthy lifestyle.

Above the throat: The native will get many good things, and he will destroy his enemy.

Above the heart: It may bring death or death like sufferings.

Between two knees: The native will get good vehicles.

Between ankle and feet: It may kill the native’s wife.

If a lizard falls on a Man

Nails: On the left side it will create some, and on the right side unnecessary expenses will be increased.

Neck: Falling on the left side will bring out success whereas on the right side will increase enemies.

What happens if a lizard falls on left leg for male: It is being said that the person may face some loss.

Back foot: shall get ready for a journey.

Get more updates on the Aries sign- Aries Horoscope Today

If a lizard falls on a Woman

Left Eye: Your man will shower abundance love on you.

Upper lip: You may be on the way to see disputes.

Backside: Death news may be anticipated.

Hands: Financial profits on the way.

Shoulders: You will be adorned with ornaments.

Toes: May give birth to a male child.

What are the remedies for lizard falling?

You should take an immediate head bath, visit the nearest temple and light lamp to God soon after experiencing a lizard fall irrespective of any part of the body. Recite “Maha Mrityunjaya Mantra” to avoid negativity. Either touch the golden lizard in Kanchipuram or touch the people who touched the golden lizard. In the temple, both golden and silver lizards can be seen along with sun and moon images on the roof. It is believed that all ill effect will vanish by touching the lizards. Don’t be panic. Just follow the remedies to come out from any lizard doshas.