We may know Hinduism as a religion or a stream, but it much more than this. Hinduism is a lifestyle, it is a path to spirituality, and ultimately, it leads to Moksha. It is a collection of philosophies that are widely practised in the Indian subcontinent and many South-Asian countries.

Unlike most of the other religions of the world, Hinduism has no founder and is not based on a single scripture. It is a broad concept that evolved with time. The roots of the world’s oldest religion date back to 4000 years. It is a faith that has been practiced through our Karma.

Hinduism makes us believe that we take life too seriously, but if we follow the right rules and track, we can live it effortlessly. It is our Karma that decides the direction of our life. The Karma may belong to the past life or the present one, but they are powerful enough to control our destiny.

Karma and destiny are two tires of the cart that drive human life towards its ultimate goal – Moksha. Let’s read further to know how these three concepts are interrelated and dependable. 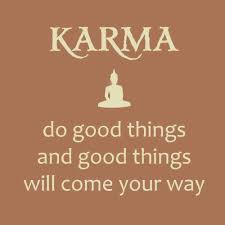 What goes around, comes around.Karma is the action of the person. According to Hinduism, the actions of the person decide its fate and future for this and the next life. A person who lives his life in a selfless manner will be rewarded for his actions in this life or another. The same holds for negative actions as well. The actions of selfishness, heinous crimes, jealousy and cheating are punished by different ways. A scoundrel person will be paying for his evil deeds later or sooner.

Ultimately, it is the circle of the Karma that comes to an end.

However, the word Karma is related to incarnation as well. The word is not used quite frequently as such. Other phrases define the deeds like “What goes around comes around” and “what you sow, so shall you reap.”

Karma is a broader concept that one might think of. Our action or what we do today bear an impression on the forehead of fate in a strict course of cause and impact.

The concept of destiny is an extension of the concept of Karma. It is our destiny that decides what we get and whatnot, if we suffer or not and what we become. How hard one might try, one can never escape his destiny.

The role of destiny in human life is one of the most debated topics ever. Earlier people used to believe that everything in life is controlled by one’s destiny, but later the rationality tried to erode the concept. Successful people do not believe in this theory much, and they emphasize the concept of man shaping his own life.

Different Viewpoints on Karma And Destiny

When it comes to Destiny and Karma, three major views prevail in the world:

Different people believe in different concepts, but everyone agrees at the existence of one supreme power in the universe. The purpose of our actions is to make the man perfect and free him from the vicious circle of birth and death. Salvation or Moksha is the ultimate target of humankind.