Kanwar Yatra or popularly known as kanwad Yatra, is the annual pilgrimage in the worship of Lord Shiva. In this annual pilgrimage, the devotees of Lord Shiva go to Hindu pilgrimage places and bring water from the holy river Ganga and fetch water from river Ganga. The same Ganga water is offered to Shivlinga in the local Shiva temples. Sultanganj in Bihar, Gangotri, and Gaumukh in Uttrakhand and Haridwar are the most popular Hindu pilgrimages to fetch holy water from. 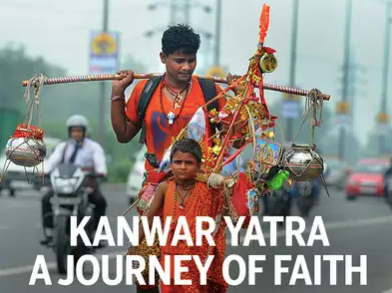 Kanwar Yatra usually takes place in July or August. It corresponds to the Hindu month of Sharavan. However, the Kanwar Yatra that is related to Sultanganj to Devgar in Bihar and Jharkhand is undertaken a year long. In this Kanwar yatra from Bihar to Devgarh, the devotees walk barefoot with utmost enthusiasm and devotion.

Initially, the Kanwar Yatra was observed during the month of Bhado. It was later that it started to take place in the month of shravan. It was from the year 1960 with the start of a mela, the time of the Yatra shifted to Shravan month and it lasts by the festival of Dussehra.

The two significant Hindu festivals “Basant Panchmi” and “Maha Shivratri” are observed during this period, and these two festivals increase the enthusiasm of Kanwaris manifold.

According to statistics, around 2 crores of Kanwaris perform Kanwar yatra every year. The yearly “Shravan mela” is one of the biggest fates organized in North India. The religious congregation will be similar during Kanwar yatra dates this year as well.

The most interesting part is that the festival is not related to men only. Women participate in this festival with equal enthusiasm and devotion.

Also Check : Which date has Raksha Bandhan in 2022?

This year Kanwar yatra 2022 date is Thursday, 14th of July. The Yatra will commence from this date and will last by the festival of Dussehra.

The Rituals of Kanwar yatra

One of the most engrossing rituals of this Yatra is how Kanwar is carry the Kanwar. They carry it around on both of their shoulders. Kanwar is a small bamboo pole where two earthen pots are ties on both ends of the pole. Both the earthen pots are beautifully decorated. The Kanwar is also decorated with colorful dupattas and hangings.

During their journey, the kanwaris fill the pots with the holy Ganga water and perform their return journey by balancing the full pots on their shoulders. Upon reaching back to their hometown, they use this holy water to shower the Shivlinga of the local temple.

It is a month-long ritual. The Kanwar’s wear saffron clothes and walk barefoot to reach their pilgrimage destination. They reach their destination, collect water from there, and return to their hometown to do “abhishekam” of their deity.

The Kanwar yatra and abhishekam is considered as the thanksgiving. The devotees thanks Lord Shiva for what they have got in their lives and pray for what they desire to achieve.

During the whole journey, they have to make sure that the earthen pots should not touch the floor. That is why; different types of makeshift stands are created so that kanwaris can take rest without breaking any ritual.

Kanwaris make sure to walk in groups during this Yatra. While most of them walk barefoot or at least on their foot, some of them use bicycles, scooters, and even cars to complete their journey. They chant ‘Bam bam Bhole’ and religious bhajans throughout their journey.

These committees work actively throughout the month of Shravan. Such NGOs work on a donation and are exempted from any income tax.

The yearly ritual has its significance. Kanwaris consider it as a spiritual break where they cut off ties from the materialistic world and devote all their time and energy in the worship of their deity. It can also be considered as a break from the negativity and stress of routine life. They give their all to take blessings from Lord Shiva.