Ganesh Chaturthi is a grandeur festival celebrated across the world, especially in India. Lord Ganesha is worshipped first before beginning any work. He grants the way of success in our life. Ganesh Chaturthi is the birthday of Lord Ganesh that usually falls in between August and September of every year. The festival starts on Shukla Chaturthi and culminates on Ananta Chaturdashi. Lord Ganesha is the eldest son of Lord Shiva and his Consort Goddess Parvathi as per our Indian Mythology. 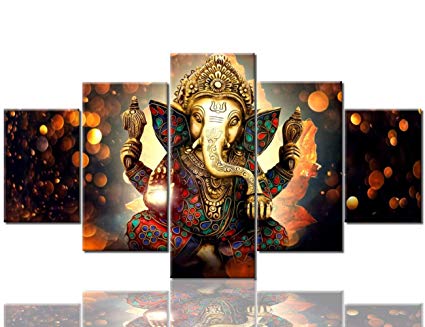 Ganesha or Ganapathi bears the elephant head which rests an elegant tiara, and four podgy hands joined to a fat belly. Each side holds its object – a Trishul or a trident, an Ankush or goad, a lotus in the third and a rosary that is sometimes replaced by Modaks, his favorite sweet in the fourth hand.

There is an inquisitive story behind the birth of Lord Ganesha.

It is believed that once while Goddess Parvathi was in bath, she created a human figure from the balm, gave him life and instructed him to guard the door until she comes out. Lord Shiva wanted to see his better half after a long period of meditation on Mountain Kailash, so he rushed there. But, he was stopped by the human guard at the door itself.

Outraged by the activity of the human figure, Lord Shiva cut off his head. Later he came to know that he had killed Parvathi’s son. To avoid Parvathi’s anger towards Shiva, he immediately sent his attendants to get him the head of the living creature which they could find first. They found an elephant as the first living creature. As per God’s instruction, the elephant’s head was chopped off and presented in front of the Lord. He placed the head on the son’s body and gave his life back. Later, the elephant-headed God was welcomed into the Hindu heaven and named Ganapathi or Ganesha. The name means the Chief of ganas or the attendants of Lord Shiva.

This brave guardian of Goddess Parvathi is respected and worshipped as the most auspicious God of new starts. He is worshipped during every festival, before initiating any new venture or a journey. You may see Lord Ganesha carefully guards the entrances of temples. Houses, hanging on the wall calendars and gracing the wedding cards.

It is believed that one who worships Lord Ganesha with a belief he will be blessed with intelligence, prosperity, and lead an obstacle-free life.

The festival is grandly celebrated in Maharashtra and other than that Tamilnadu, Karnataka, Andhra Pradesh, Goa people also celebrate Ganesh Chaturthi. If you want to enjoy the celebration, visit Mumbai, which is an iconic place. Main celebrations will be held in Siddhivinayak temple. Besides, numerous statues will be erected at every part of the city for rituals.

During the festival, clay idols are kept at every house for two to eleven days. During the period, every morning and every evening, aarthi will be performed along with singing songs on Ganapathy; hymns will be recited. Especially, children will enjoy this function. Predominantly Modak is offered to the Lord Ganesha every day. Karanjis is another sweet which has the shape of the 4th-day moon.

The festival culminates by immersing the Idols in the rivers, wells, and sea. This ceremony is called Ganesha-Visarjan. During the immersion, a huge crowd will be forming a procession and carrying idols to immerse in the water. The procession usually starts in the afternoon and continues until late at night with huge sounds (Ganapathi Bappa Morya).

Huge images of Lord Ganesha ranging from 10 to 40 feet are installed in this public celebration, and daily entertainment programs will be the core attraction. Till the last century, Ganesh Chaturthi was celebrated within homes privately. But, now the festival turned as a public ceremony.

Every year more than 150 thousand Ganesha statues are immersed in the water in Mumbai. The immersion and dissolving indicate that God is omnipresent and figureless. Lord Ganesha Statue is offered with flowers, fruits, sweets, and coconut for the eleven days. Each city has a group that celebrates Ganesh Chaturthi grandly with no caste and religious bias.

Apart from India, we can see a massive celebration in Canada, Mauritius, Singapore, North America, and Malaysia for Ganesh Chaturthi.

“Lamboodhara Piranalu” is the name of Ganesh Chaturthi in Kerala. In Thiruvananthapuram, you may see a procession starts from the Pazhavangadi Ganapathi Temple to Shankumugham Beach with tall statues of Ganesha which are made up of organic items and the statues are immersed in the sea along with milk.