Mostly, yoga always brings prosperity and happiness in human life. But, it is determined only by the impact of other associated planets. One such yoga is called Gaj Kerai Yog. This yoga is considered to be an auspicious and the biggest yoga in one’s life.

What is Gajakesari Yoga? 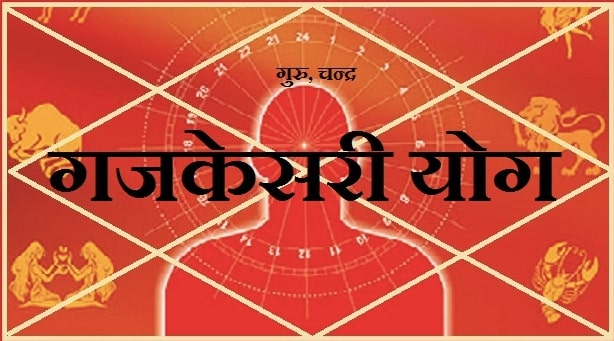 Gajakesari yoga is formed in one’s natal chart when the planet Jupiter is in Kendra, i.e., Ascendant, 4th, 7th, and 10th from the planet Moon. When we split Gaja and Kesari, they mean Elephant and Lion. Both are gigantic, dominating, and captivating animals.

A person who has Gajakesari yoga in his/her birth-chart will be capable, efficient, and they will get all comforts, enjoy sophisticated life, and occupy a higher rank in their professions. Such persons will be highly skilled in arguments, debate, and creative arts, and especially they will be very intellectual. This yoga increases the longevity of the native.

The Seventh house is considered for marriage as per Vedic astrology and if Gajakesari Yog occupies the 7th house, then

Presence of this Yoga has been observed in many influential persons, and they are leading good married lives. Jupiter generally signifies fame, children wealth, and moral living, whereas Moon signifies mobility, happiness, mind, and prosperity, etc.

When the planet Sun aspects this yoga, then it yields powerful results to the native in his/her early age of life with administrative and government power.

The planet Jupiter is said to be wealthy among all other planets. Moon is also well-known for money. Hence, it is said that when the yoga is in an auspicious place, it will give the native more prosperity as big as an elephant, and the person gets wide opportunities to earn money continuously.

Get more updates on the Cancer sign- Cancer Horoscope Today

When would Gajakesari yoga work?

Astrologically, this yoga can appear in many natives’ horoscope. Still, like all other planetary associations, Gajakesari yoga also inclines on the strength, position and house lordship of the two planets Jupiter and Moon. Different planetary positions may be stronger than these planets that are also considered. Guru and Neechabhanga Chandra are considered to be good. The two planets have to be beneficial in one’s Kundli and suitably disposed to the Lagna Lord as well. They themselves should be free from any negative facets, especially Saturn and Rahu should never be combined with Moon.

When Would the Yoga’s Results Show Up?

The results of this yoga would be positively revealed in Dasha/bhukti periods of Moon and Jupiter and during Mahadasha periods of other planets and also when the main Dasha lord complements both Jupiter and Moon. Otherwise the native cannot expect elevation.

When the yoga does turn weak?

Typically, the native can expect auspicious results from this yoga. However, the presence of this yoga not only sufficient to achieve great things, but it must carry strength too. When the yoga is formed with the planet Jupiter in the Capricorn sign, then Jupiter’s debilitation makes the yoga to lose its power and entire auspiciousness cannot be anticipated.

And also if Jupiter occupies Taurus, Gemini, Virgo or Libra sign, then the yoga turns weak because the Jupiter is present in its enemy’s sign. Likely, if the Natal Moon is weak due to its debilitation or placements in its rival’s sign say, Taurus, Gemini, Virgo, Libra, Capricorn or Aquarius, then also Gajakesari yoga loses its power.

Both the planets do a Shadashtak yoga which is located in the 6th and 8th house from each other. In such condition, if one symbol of the Venus in Kendra and another symbol is in the evil’s house, then the Gajakesari Yoga will be considered as inauspicious.

How to Determine Gajakesari yoga in a native’s natal chart?

Many people question that do I have Gajakesari yoga?

Jupiter is called the King of planets, and it is considered as a beneficial planet since it gives prosperity without any expectations. When Jupiter and Sun conjoin, one can enjoy an abundance of wealth. Hence, both the planets should be well placed to earn and enjoy a lot. When Jupiter, Moon, and Mars in the Cancer sign for a Cancer native, then the native will be rich out of his/her sincere work and divine grace. The presence of Jupiter in Cancer, Sagittarius, or Pisces and the 5th lord position in the 10th house indicates that the native will become rich through his wards.

The well-placed Jupiter people will shine in their entire life. These native will always be with peace of mind, wisdom, prosperity, helping tendency, and happiness. Strong Jupiter makes people to be attracted towards Management, Religion, Administration, Consultancy, Astrology, Law, Astronomy, and Politics.

Punarvasu, Visakha, and Purvbhadrapada are Jupiter’s constellations. 2nd, 5th and 9th houses own Jupiter as their Karaka. Mercury and Venus are rivals; Sun, Mars, and Moon are his friends. Saturn, Rahu, and Ketu are neutral to Jupiter. The planet gets exalted in the 4th house and debilitated in 10th house. In the 1st house, the planet acquires directional strength.

Thursday is favorable for Jupiter and Yellow is his favorite color. Yellow Sapphire is the gemstone for Jupiter, and the native should be careful while wearing a gemstone. This should be set in Gold and be worn in the Index Finger. Certain gemstones should not be worn along with yellow sapphire. So, consult an expert Astrologer before wearing any Gemstone. Wearing yellow sapphire will promote the benefits. Worshiping Lord Shiva will give special benefits to this yoga.

An accurate evaluation should be done for Gajakesari yoga in astrology to determine the yoga’s strength. Strengths of the Moon and Jupiter have to be checked to decide the effectiveness of this yoga in a native’s personal life.

Talk to Astrologer Know if Gajakesari Yoga is affecting your Marriage life or Not.

How To Predict Spouse From Birth Chart?