The fact may surprise you, but the origin of Chhath Puja predates to Vedas. The rituals that are performed during the chhath Puja are quite similar to the rituals mentioned in Rig Veda. The Sun lies to be the main God during this Puja. 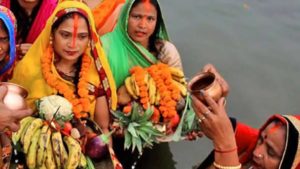 This important Hindu festival is majorly celebrated in Bihar and a few parts of Nepal. According to tradition, the Puja is performed in honor of Lord Sun and his wife, Usha. People worship The Sun and his wife for supporting the earth and bringing life, light, and energy on the earth. Also, it is a way to tell that earth will seek this divine couple’s blessings throughout.

Eventually, Chhath Puja is known as the most eco-friendly festival in India. It is so because all the ingredients required for the rituals are obtained naturally. People gather at the banks of rivers to perform their rituals and Puja. The use of synthetic materials is strictly banned in this eco-friendly festival. The ‘Daura’ and ‘soop’ are the two main materials required in the festival; both of them are obtained naturally from absolutely bio-degradable bamboo.

It is four days festival, and the actual Puja takes place on the third day.

As already discussed, Chhath Puja relates to Vedas. The references for this festival can be found in both primary epics of Hindu religion: Ramayana or Mahabharata. Take a look:

The sunset and sunrise periods hold utmost importance during Chhath Puja. These two periods are considered vital because it is only during these periods that a human can safely transcend into solar energy. The low level of UV rays makes it safe for humans.

The significance of the Chhath Puja relates to providing mental calmness. It detoxifies the human mind and body. Chhath Puja is known to enhance the energy level, and immunity reduces the frequency of anger, removes jealousy and negative emotions as well.

The main deity worshipped during the Chhath Puja is Chhathi Maiya. In Vedas, Chhathi Maiya is known by the name Usha. According to some scholars, Usha Mata was the consort or lover of the Lord Sun, but many take her as the wife of the Lord.

Usha symbolizes dawn, the very first light of the day. So, symbolically this first light invokes the consciousness of the individual. Usha and Pratyusha, the two wives of the Sun, hold much importance during this festival.

This divine realization helps in overcoming all the troubles of life and helps in achieving moksha or liberalization. The festival of bathing and worshipping is followed by abstinence and segregation.

The usual worshippers of this festival are women. They are called paraivatin. Only a few men worship during this festival. The worshippers pray for the long life and wellness of the family and their offsprings.

Traditionally, the Puja of Chhath Puja is performed on the banks of river Ganga. On the first day, the house and surroundings are cleaned. A bit of gangajal is spread in the house.

The second day is the fast and worshippers don’t intake any food or water. They break the fast after worshipping the Sun and the moon. Prashad includes poori, kheer, and bananas.

On the third day, the main day, people worship on the banks of the river and pray on the shores. They stay by the shore overnight and follow the vegetarian rule throughout.