In Hindu mythology and astrology, the Shadow God or planet Rahu plays an important role. This planet is mentioned in Buddhist mythology too. According to astronomy, Rahu is associated with eclipses. Though he is a shadow planet who does not have an original physique, still he is considered one of the major astrological gods in Navagrahas.

The Hindu Mythology says, Rahu is a snake and it swallows the Sun, thus causing an eclipse. This demi-god is believed to bring both good and bad luck in human life as per his placement in one’s birth chart. Besides his influence, he influences every individual’s natal chart and it is considered to influence particular times of the day. This specific time is called “Rahu Kaal“. Since it is treated as inauspicious, new things are avoided during this time. So, every Hindu believer trusts today rahu kalam for even small aspects to proceed.

Rahu kalam is always accompanied by yamagandam which is also considered an inauspicious time. On a regular basis, the planet Rahu covers 90 minutes between sunrise and sunset every day. So, this time varies across different days and locations. Due to its ill effects, people are particular about rahu kalam today.

In India, aaj ka rahu kaal takes an important role and is strictly avoided. It is believed that works like commencing new projects, marriage talks, interviews, constructions, purchase or sale of properties, journeys will not give fruitful results if it is performed during Rahu kalam. If your construction is already started at a good time, it may be continued irrespective of Rahu kaal.

As Rahu kalam, Yamagandam also plays a vital role in daily life. As per Hindu mythology, this is considered the son of the Lord Guru. It is also considered inauspicious like Rahu Kalam. Any activity initiated during yamagandam is believed to bring failures or even death. Yamagandam is calculated by dividing 24 hours from sunrise to sunset into eight sections. The first segment starts at 6 AM (sunrise) and the last segment ends at 6 PM (sunset).

Rahu & its effects on life

Besides Rahu’s daily effects, we can experience its impact based on the placement in our birth chart. As we already mentioned, though it is a malefic planet, the same can bring out favorable results too. Except for 6th, 8th and 12th houses, Rahu blesses a native abundantly with prosperity, success and fame whereas the above said houses are known as “Dusthana houses”. It may fetch bad luck and immediate changes if it occupies one’s ascendant in his birth chart.

During his Antardasha and Mahadasha, the native might experience immense struggles, problems from all sides. Whereas, if it is at a good place in a birth chart, it will make you a victorious businessman, investigator, or politician. This lord will bring you all success, social fame and prosperity. So, as to how rahu kaal today is important, in the same way, Rahu placement in a natal’s chart is very important to predict one’s ups and downs.

Apart from astrological reasons, science says that it is calculated as a part of the day and this particular time part has more UV radiation. When such UV rays hit the atmosphere of the earth from the Sun, it is considered that human health is affected by the bad effects of the UV rays. So, this scientific reason also proves the negativity of Rahu Kaal. 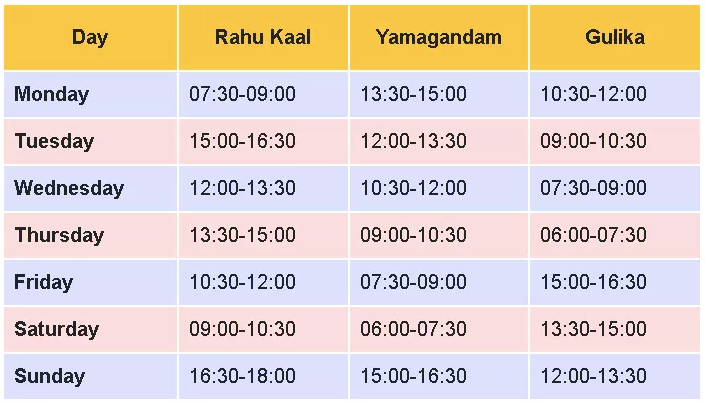 Even though the above chart helps you with the right time of commencing any new activity, it is still recommended to consult a professional astrologer even to know more about Rahu’s presence in your birth chart.

You can easily remember rahu kalam yamagandam today by remembering the mnemonic phrase “Mother Saw Father Wearing The Turban Suddenly”. The best Rahu Kaal Remedy is always to start your new venture just before or after the Rahu kaal.

Rahu Kaal is considered only at daytimes and it is ineffective during night times. Ragu Kalam timings on Tuesday, Friday and Sunday bring more ill effects than other days of a week.

As a final point, to pacify the ill effects of Rahu kalam, you can perform Rahu pooja. You can even wear Rahu’s gemstone “Gomed” and worship the planet by keeping Rahu yantra. These can definitely bring down the malefic effects of Rahu.